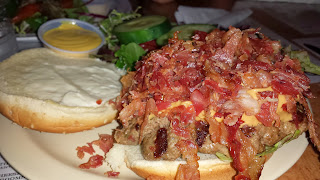 My friend Molly sent me a list of all the places I needed to check out in New Orleans and listed as the best burger in the city was at a place called Yo Mama's in the French Quarter.
Now, apparently some will say the best burger is at a spot called Port of Call, so obviously I will be going there too but this burger was no let down.
I had their most popular burger: the Peanut Butter Bacon Burger.
WHAT!?
I know.
This insane combination actually works. The first bite was strange I must admit, but I quickly realized mixing peanut butter and meat isn't all that foreign. I mean, that's exactly what chicken satay is, right? The Thai's know what's up.
And I don't usually prefer my burgers with bacon on them, but chopped up like this so you get some in every bite? It's perfection.
If you're in New Orleans, don't miss this one!

Amberoni
Among many things, I am a food LOVER. I also live in one of the best cities in the world to indulge. So I've decided to share my meals with you. I hope this inspires you to indulge too!